Famed as the Capital of Humor, Gabrovo is a town where locals take pride in their ability to ironize themselves and entertain others with their frugality and sense of economy; tourists go for it as a destination expecting to find themselves in a place of fun, wit, and enterprise. The Gabrovo mirrors in the new room will positively meet this demand – they are curved, funny, and attractive. They reflect the spirit of Gabrovo humor, transforming a person without great expense.

The Mirror Room is the latest permanent exhibition in the Museum; it is located on the first floor, next to the new souvenir shop, and it features a series of varied author’s curved mirrors and optical illusions.

The most valuable object in the room is the glamorous Gaberge Egg with a faucet (a whole egg is too much for a meal!).

Another legend has it that Alexander III’s heirs wanted to buy it, but the thrifty managers of the Museum of Humor and Satire figured out they would earn more from the admission tickets if they kept it.

The new room comprises a series of art installations designed by the young Gabrovo artist Nevena Ekimova who is a participant in two of the editions of the Gabrovo Biennale and designer of the children’s favorite exhibition room Garden Town opened in April 2019. Two of the attractions – the Gaberje Egg with a faucet and the Kaleidoscope for Two are the work of another participant in the last Gabrovo Biennale, i.e., the Veliko Tarnovo artist Plamen Kondov. Sharing space with the new souvenir shop, the new Mirror Room is part of a long-awaited renovation of the first floor of the Museum.

These two strategic interventions are an important investment in the development of the Museum, which, especially at a time when all tourist sites are back on their feet in the post-covid crisis, will help attract new visitors and contribute to the choice of Gabrovo as a tourist destination of the year in which the Capital of Humor celebrates 160 years since its declaration as a city. 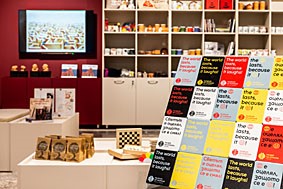 A new souvenir shop opens in the Museum of Humor and Satire. It is the one and only museum project in this country that is implemented with full credit financing. The loan amounts to BGN 80,000 and has a repayment period of 10 years; the funds are provided by the Regional Fund for Urban Development – North. With its eighty square meters, it will be the largest museum souvenir shop in Bulgaria. It will offer both traditional Gabrovo souvenirs and many new ones as their variety will continue to enlarge. For the new souvenirs, the museum team works with a number of designers, artists, and craftsmen, including Studio Punkt; Christopher Cholak, a Bulgarian living in Istanbul; photographer Rosina Pencheva; artist Yanko Yanev; the ceramics artists Veselin Damyanov and Encho Gankovski. The Koleff chocolate factory is producing a chocolate egg with a faucet. Thanks to the partnership with Knigomania, the souvenir shop will offer best-selling titles of satirical literature, luxury art, architecture and design books and clever toys. The museum shop will continue to offer limited editions of works by artists who stage exhibitions at the museum. [+]