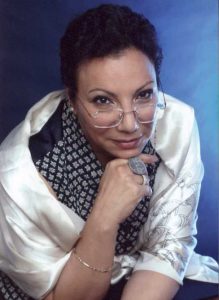 New Hermopolis has been awarded the World’s Best Creative Residency by Creative Tourism Network® (CTN) in 2017. New Hermopolis is an individual non-profit social enterprise founded by Dr Mervat Abdel-Nasser with the mission of capitalizing on Middle Egypt’s heritage for the cultural and economic development of this region.

The Creative Tourism Network® (CTN) had the honor to interview Dr Mervat Abdel-Nasser .

CTN –What is your link with creative tourism?

New Hermopolis is an individual social enterprise founded at the heart of Minia’s antiquities with the mission of harnessing this heritage, tangible & intangible of this region towards its sustainable development. It is an ‘integrated model’, consisting of an organic Farm, an architecturally unique Ecolodge and Cultural/Heritage Centre.

Mervat Nasser: The founding of New Hermopolis is inspired by the ‘Hermetic Philosophy’ with its belief in the possibility of harmonious living and the power of art to transform man and society. At the core of our project is the dream of transforming it into a ‘Creative Community’ where people can come together (locals and visitors) to create something beautiful and see it grow

we take pride in our Art & Culture Programme with its emphasis on ‘art appreciation & education’ including, craft, design, film making, music and performing arts. We also have an eye on ‘ Heritage Inspired Creative Industries’ and through our village (s) outreach programme we are trying to establish a ‘network of cultural entrepreneurs’ who in turn will have the chance of creating for themselves new work opportunities in the art/craft market.

Several of our cultural activities/performances were showcased within our annual Thoth’s Festival which took place for the first time in Oct. 2015.  This festival is a revival of an ancient Egyptian one that celebrated the power of the ‘Creative Word’, the very essence of ancient Hermopolis and its guardian’ Thoth’ who conveyed to humanity all art and knowledge.

Theatre, storytelling and performing arts represent the bulk of our activities in this festival. We encourage and foster local talent who use ‘our venue for their shows’.  We are currently in the process of forming a ‘Children Theatre Troupe’ drawn from the local village.

We are also engaged with some academic and art institutions in the UK to make our ‘Thoth’s Festival’ an international cultural event in Oct,2023.  This will coincide with the 50th anniversary of the death of the notable Egyptian writer ‘Taha Hussain’, a native of this region who played an important role in the making of modern Egypt.  (Attached, a resume of the previous Thoth’s Festival ‘s activities).

This Festival on its own right- should represent in the foreseeable future a major tourist attraction.

In addition, we offer artists, national and international ‘Art Residency’, as well as promoting our destination as a ‘Creative Healing Hospitality’ where ‘Art Therapy’ in its wider sense could be employed towards re-creating the individual and renewing his/her commitment towards making a better and more peaceful world.

CTN-What are according to you, the 3 main virtues of creative tourism in general

Created by the CTN, the Creative Tourism Awards aim to reward companies, projects and destinations worldwide that foster this new generation of tourism, characterized by the active participation of the tourists in artistic and creative activities.