Tunisia, the culinary and creative destination for new travellers looking for authentic experiences!

The Culinary Route of Tunisia: a new tourism co-creation offer that invites travelers to discover Tunisia’s culinary heritage through creative experiences, based around six flagship products.

Tunisia owns all the assets to seduce travellers in search of authentic and human cultural experiences.

This project, driven by the GIZ * and managed by the Creative Tourism Network®, aims to highlight the wealth of Tunisian culinary heritage from all its angles – human, cultural, artistic and creative – thanks to a tourism development that meets the criteria of quality and authenticity.

This route will offer tourists the opportunity to discover the country through its flagship products by inviting them to explore an ancestral culinary heritage combining immersion and taste experience.

In consultation with the working group formed by representatives of trades operating in the theme, namely: the Ministry of Tourism and Handicrafts, the Tunisian National Tourist Office, the Tunisian Association of Professionals of Art Culinaire, the General Directorate of Organic Agriculture and the Tunisian Federation of Tourist Restaurants, the choice was oriented towards the following products and regions: “The Cheese of the North-West”, “The Harissa of Cap Bon”, ” Olive oil from the Center and Dahar”, “Wine from the North”, “Dates from the South-West” and “Octopus from Kerkennah”. 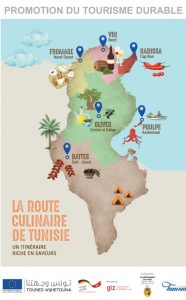 In addition to promoting new creative tourism attractions, the Culinary Route offers itself as a model of virtuous tourism, satisfying a large number of Sustainable Development Goals of the United Nations 2030 Agenda, particularly with regard to respect for ecosystems. natural, economic and social, by converting culinary know-how into new drivers of attractiveness and inclusion for the territories.

In fact, one of the added values of this project is based on its participatory and inclusive approach with producers, farmers, winegrowers, craftsmen and restaurateurs in geographical areas linked to the range of products offered by the regions concerned, and will not be limited to regional borders.

Indeed, The Culinary Route invites local actors in the agricultural, cultural and tourist sectors of Tunisia to participate in this collaborative project, benefiting in particular from better visibility, training, advice, as well as exchanges of good practices with international experts and entrepreneurs.

The Culinary Route is thus intended to be a lever for sustainable economic development through the diversification of the tourist offer and the creation of job opportunities, while optimizing existing resources, whether natural, cultural or human.

The Harissa is a clear example. Recognized as Intangible Heritage of Humanity by UNESCO last December, it will be at the heart of the experiences designed by professionals from the Cap Bon region, as part of the training provided by the international experts participating in the program. Tourists will thus be able to discover, in addition to the flavors, the know-how, by participating themselves in its elaboration. A model which will be declined in the 6 previously defined culinary regions.

Through a range of experiences designed for the most diverse audiences – from travelers still studying, to Premium visitors, through new traveler profiles, the Culinary Route will offer a differentiating element that will position Tunisia among Mediterranean destinations. the most popular for quality tourism and spread over all the months of the year.

Follow-up actions along the route will focus on developing new culinary experiences, improving existing offerings, showcasing products and building the capacity of tourism operators. These activities will be supported by the implementation of a communication and marketing strategy that will ensure the promotion of the culinary route and its visibility in the outgoing markets.

This initiative is supported by the project “Promotion of Sustainable Tourism” – joint action of the European Union within the framework of the “Tounes Wijhetouna” program and the German Federal Ministry for Economic Cooperation and Development (BMZ), implemented by GIZ* in partnership with the Ministry of Tourism. In addition to the Culinary Route, the GIZ has launched the Cinematographic Route in 2022, aimed at promoting the filming locations of famous cinematographic works.

The Deutsche Gesellschaft für Internationale Zusammenarbeit (GIZ) GmbH is a German federal enterprise active in the field of international cooperation for sustainable development. In Tunisia since 1975, the GIZ implements development projects within the framework of Tunisian-German cooperation, and this in four sectors, with particular emphasis on the development of rural areas: sustainable management of natural resources, renewable energy and energy efficiency, sustainable economic development and employment promotion, as well as regional development, local governance and democracy.

The presentation of the Culinary Route at FITUR will take place in Pavilion 6 on the Tunisian stand nº6E06: