Creative tourism, also known as orange tourism, demonstrated once again at FITUR, which not only responds to the growing demand of new generations of travelers, but also contributes to creating value chains for the territories.

As every year, the Creative Tourism Network® actively participated in this Fair, promoting creative tourism programs that, from Recife (Brazil) to Loulé (Portugal) or Les Îles de la Madeleine (Québec), passing through Ibiza, Gabrovo or French Provence, offer tourists the opportunity to get to know the local culture by sharing creative experiences with the inhabitants, thus contributing to the formation of an ecosystem.

These experiences are the result of a process of co-creation within local communities, including artists, artisans, associations, farmers, entrepreneurs in the tourism sector, and public collectivities among others.

Thus, together in the same network, destinations as different as municipalities, metropolis, islands, or rural areas share, from their respective continents, this same innovative vision that makes tourism not only a commercial sector, not to say an industry, but also a lever that facilitates the sustainable development of other sectors.

In this regard, the Creative Tourism Network® presented once again a showcase of each destination at FITUR, highlighting the newly released programs such as, for example, the cases of Quito (Ecuador), Barcelos (Portugal) or Valparaíso (Chile).

Quito, a mosaic of experiences

The Ecuadorian capital is a pioneer in its country in betting on the orange economy in order to diversify its tourism offer, involving sectors ranging from agriculture to creative industries, through arts and crafts and gastronomy . The profile of the traveler who visits Quito is nowadays interested in living authentic experiences in very diverse environments of the city, and thus sharing privileged moments with its inhabitants, staying longer and out of the high seasons.

Tourists attracted by the magnetism of Valparaíso (Chile)

Considered as the cultural capital of Chili, Valparaíso has inspired artists and creatives for centuries and continues to fascinate travelers in search of unique experiences. Its unique atmosphere seduces artists and artisans from all over the world who, in turn, transmit their passion for the city to tourists. Therefore, the Municipality has promoted a program that gives visibility to the rich offer of creative tourism, which completes its recent nomination as Creative City of Music by UNESCO.

located in the Porto and Norte region of Portugal, has always been a benchmark for handicrafts – and more particularly pottery. Thus, the exceptional nature of its artistic resources, as well as its brilliant strategy based on the use of creativity as an engine for tourism and the local economy, are reflected in its creative tourism program, whose “CreativeFriendly” label has been completed, in this case too, the already prestigious recognition as a Creative City of UNESCO.

In addition to these three presentations, the Creative Tourism Network® has promoted in Fitur, all its member destinations, so that they expand their visibility both to the international press, and to tour operators, increasingly interested in these experiential trends.

In FITUR, the Best Creative Experience award was also awarded, awarded this year to the Municipality of Postira (Croatia) for its International Championship in Olive Picking (ex-æquo with La Méduse, blown glass, located in the Magdalen Islands, who will receive their award later). 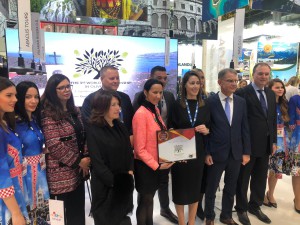 Finally, it should be noted that the immense potential of Creative Tourism was repeatedly highlighted by the Ministers participating in the Ibero-American Conference of Tourism Ministers and Entrepreneurs (CIMET), organized by the Grouxo Nexo, among which Mr. Julián Guerrero Orozco, Vice Minister of Tourism of Colombia, leading country in Orange Economy.

The Creative Tourism Network® is already working on the 2021 edition of Fitur, in which it will present its new member destinations within the framework of the International Year of Creative Economy for Sustainable Development, according to the newly declared UN. But for now, it should be remembered that in a few days, creative tourism will also come to ITB Berlin!