Gabrovo Municipality in collaboration with Studio Komplekt (a consultancy and production creative agency in Sofia, Bulgaria) organized the cultural program “10 Days of Culture in District Six”.

The event was held from 17 to 26 June 2022 in the historical heart of Gabrovo. It was carried out under the European project “Creative Industries for New Urban Economies in the Danube Region” (with the acronym CINEMA), funded by the Danube Transnational Program INTERREG. District Six is the project pilot location where all efforts and actions of both partners are focused.

Different art organizations and local and foreign cultural institutes took part in the cultural summer program. It offered a variety of art events, two creative workshops, exhibitions of local and foreign artists, a public discussion on design and fashion, visual transformations in the pilot location, documentary theatrical performances, and literature city tours. The aim was to show off the hidden potential of District Six for small and retail businesses, for creative industries and to transform it into an art and tourist hot spot. The cultural program consisted of a series of events with free access.

An open-air exhibition “Sustainable fashion and design in the countries from the Visegrád Group” and a public discussion led by the Hungarian Cultural Institute “Liszt” in Sofia and Studio Komplekt. 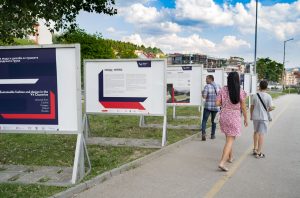 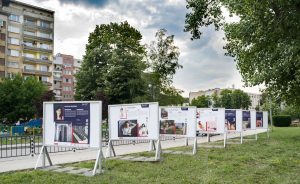 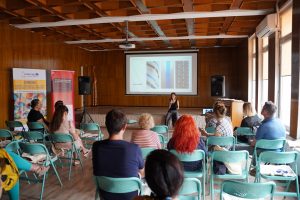 The exhibition ran from 17 June (the official opening) to 30 June 2022. It took place on one of the most beautiful pedestrian areas in Gabrovo along the river and attracted a lot of visitors curious to see current trends in sustainable design and fashion, what artists from other countries are interested in, what they achieved in this field.

The exhibition was followed by a public discussion “Sustainable practices in design and fashion: Gabrovo issue” led by the Hungarian Cultural Institute “Liszt” in Sofia and Studio Komplekt”. It was held on 25 June 2022 in the House of Humour and Satire in Gabrovo – very close to the exhibition venue. Several issues were discussed: innovative solutions to nowadays problems connected with Earth pollution, how to preserve the environment and help our planet by using waste materials for new design products, how to create sustainable practices – the choice of the artist what kind of materials to use in his or her work. 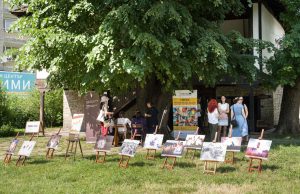 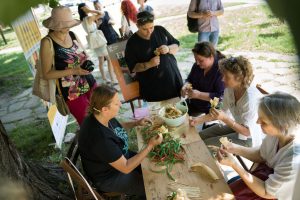 Both events were held on 17 and 18 June 2022 in front of the Dechkov’s House Museum in District Six. The photo exhibition presented a typical summer Bulgarian folklore tradition. It caught lovely moments of the feast and made it more popular among young generations who live in the town and have lost their connections with our folklore and life in the countryside. During the workshop, visitors learned how to plait something from the husk or leaves of maize, and to create art products of natural materials such as flowers, carpets, or mats. 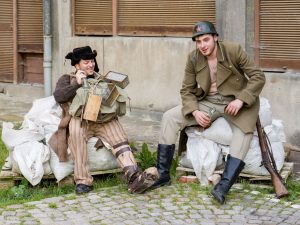 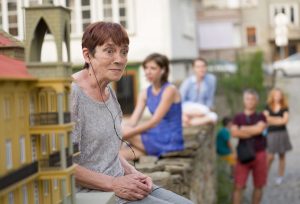 For three evenings District 6 was enlivened by six stories of its past. The event was held on 17, 18 and 22 June 2022 on the streets of the historical location. Through a verbatim approach, the Vox Populi studio presented popular stories of emblematic people who lived there in the past and of the everyday life of the neighborhood. Professional actors from the Drama theatre in Gabrovo took part in the performances. Many visitors heard these for the first time these stories, and others recalled them. For the main part of the audience, it was an emotional moment of touching the history and live memory of District Six. At the end of the event, they felt as a part of the local community and not just visitors. 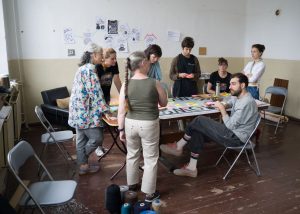 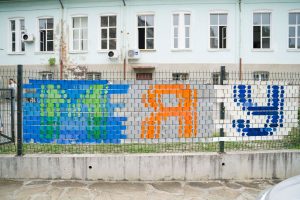 Three designers and artists from the independent educational platform for art and design “Know-How Show-How” were the mentors of a group of eight volunteers from the country and Gabrovo, including an artist from Australia. All of them were with different educational and experience backgrounds. Through the methods of design research and interdisciplinary learning, they collected data and visited several local companies from which they received waste materials for their design experiment.

On the last day of the 7-day workshop, the volunteers presented several prototypes of design objects. Among them were furniture for the local beer pub; lamps, curtains, furniture and photos stand for interior transformations; a visual indication of the boundaries of District Six; creative maps of the area. During their research work and walks around the neighborhood, the participants found that the local community needed a place for community gatherings, cultural life, and exchange of ideas. According to the volunteers such a role could be carried out by the Cultural Community Centre “Buditelite” which is based at the venue of the workshop in District Six. 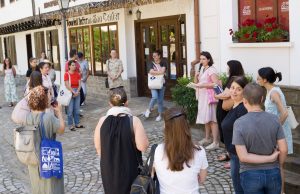 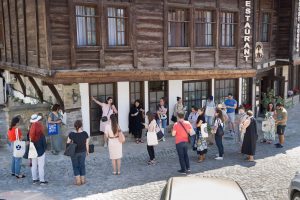 The literature city tour in District Six was held on 25 June 2022 and it was attended by people from different walks of life. It helped the audience see the beauty and the cultural heritage of the neighborhood through the eyes of a poet. Through some literature bites from the Bulgarian poets and writers, the visitors rediscovered different historical places in District Six – like original buildings, architectural features, Saturday central market, and the hidden spirit of the location. The poet Albena Todorova led the tour by reading short parts of poems which best described some chosen in advance spots. 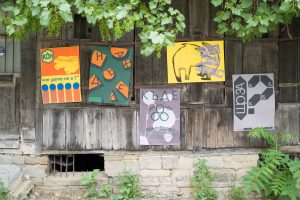 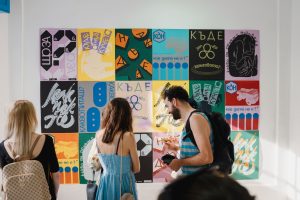 Five artists and designers turned District Six into an open-air gallery. Their exhibition of social posters put questions to the people and visitors of Gabrovo. It is a result of the creative workshop “A question on time” for screen printing led by the local artist Miroslav Zhivkov, founder of the art studio “NoPoint atelier”, in collaboration with Yana Nikolova.

During the workshop, the participants created more than 200 posters – all of them hand-made by using different design approaches. Every artist had to invent two kinds of the design per work. In this art installation, the role of the posters to sell or advertise was taken away. That is why they were called “social” – to provoke visitors to think on, be curious or find their own answers of the posters’ questions. The workshop was held from 21 to 26 June 2022 in the art studio “NoPoint atelier” near Gabrovo and was supported by Program “Culture” of Gabrovo Municipality.